Natural Event has designed and operates the most effective, practical, enjoyable and appraised toilet system for festivals, events and gatherings where people poo

Natural Event was created after the organisers of the Festival Folk Rhythm and Life’, in Victoria Australia, came to understand that the toilet system they had created to cater for their three day festival, had national and international relevance. Natural Event has risen to meet the demand that festivals have around the world, a demand that starts with the need to respect. Respect for the patrons, respect to the use of water and respect for the reduction in energy needed to transport and treat the previously massive quantities of waste produced. Patrons at camping festivals in particular, always complain about the toilets. By firstly listening to the people, and then seeking answers, a problem turns into a hugely positive component of the event. There can be no real comparison of Natural Event’s impact to the traditional suck and pump system of the port a loos. We have no smell at all, even in the blistering Australian sun, five days into a huge camping festival.

Simply, Natural Event has pioneered the introduction of composting toilet solutions to festivals around the world. Having begun our impact in 2000 with an alternative toilet system that has the design and durability to service any demand. Natural Event Composting Toilet Systems are, Changing the World from the Bottom Up. Natural Event wishes to give evidence that it is possible to change a huge festival or a small group for the better by having a decent, if not inspiring moment for the movement. By showing that we can achieve this humble aim with large numbers we are also showing that it is possible for any sized group of people any where to be able to manage their daily deposits with out fear, and with out water and energy being unnecessarily consumed. From Festivals and events, weddings, to the suburban home & new housing developments, rural and remote settings, to disaster relief and chronic sanitation needs, the time has arrived to do more with less. 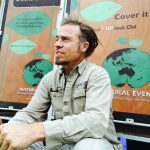 From environmental chemist to music festival organiser, TED speaker, celebrity supporter and sanitation solver: a man on a mission to change the world from the bottom up’!

Hamish Skermer is the Australian-born founder and managing director of the world’s biggest provider of composting loos, which brings dignified and environmentally sustainable sanitation to a variety of situations around the globe where there is little or no running water. Hamish has become known as the ‘King of the Composting Loo’ now that his company has provided toilets for 350 events in 7 countries around the world – all based on his tried and tested unique loo design.

The events in question include The Falls and Meredith Music Festival in Australia, and in the UK, Glastonbury Festival – the biggest gig on the planet. In June 2022, his company will provide a fifth of all loos on-site; 1,000 composting loos for 210,000 people over 5 days at Pilton Down, Somerset. This event alone will generate  around 250 tonnes of compost – enough for local farmers to fertilise 30 acres of land (the equivalent of 60 football pitches).

Hamish is a man on a mission to change hearts and minds when it comes to poo: “There is no such thing as ‘human waste’, it’s only waste if we waste it,” and he’s passionate about helping communities grow food using compost from their own waste, particularly in areas that are desperate for water-free sanitation, such as refugee camps, war zones, and disaster-struck regions. He makes the valid point that, “Everyone on the planet deserves a dignified pooing experience, and these loos provide it: They don’t smell or pollute, they make compost to fertilise the soil and grow more food.”

Whilst studying for his degree in environmental chemistry at RMIT University, Melbourne, Skermer started an environmentally friendly music festival on his parents’ land in Victoria, Australia. This was 1996, when no precedent existed for composting loos at large gatherings. The local council didn’t know at first how to deal with his refusal to use chemical porta-loos, which he deemed to be smelly, polluting and undignified. They discouraged and fined him for creating compost as opposed to chemically-charged sewage, but he continued to refine his design for the ultimate composting loo.

FROM YOUTH AMBASSADOR TO ENTREPRENEUR

In 2002, having perfected his composting loo concept, he co-founded Natural Event with a business partner. Organic growth through increased orders enabled expansion, and led to him founding Natural Event Europe in 2008 in the knowledge that there was a strong market beyond Australia.

Hamish continues to combine his dual loves of music and the environment, but remains committed to a grassroots approach: “Festival sites are like ‘hedonistic cities’, but there are plenty of areas where people live in tents because they have to, due to being displaced or becoming refugees. This is where there’s huge potential to grow.” Indeed, in 2010, the Oscar-winning actress, Patricia Arquette (Boyhood, Medium, CSI: Cyber, True Romance) who’d heard about his sanitation dedication via Facebook, persuaded him to help earthquake-hit Haiti as part of her GiveLove initiative. Hamish remains passionate about helping displaced communities achieve a dignified experience for the most natural event of all.

Natural Event has designed and operates the most effective, practical, enjoyable and appraised toilet system for festivals, events and gatherings where people poo.